We are the Five Warriors

Dracula Man, the first opponent, challenges Kuririn! Kuririn is filled with confidence, but he gets bitten in the head by Dracula Man and has his blood sucked! Having lost a large amount of blood, Kuririn is ultimately defeated by Dracula Man. Goku and the others then work on a strategy, and Upa and Puar participate together. They blow Dracula Man away with the things a vampire hates, garlic and the crucifix! Moving on, they pass the baton to Yamcha, but the next opponent is Mr. Invisible, an invisible man of all things!! 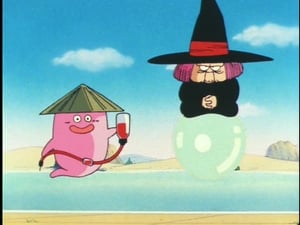