Yamcha has a tough battle with an undetectable invisible man as his opponent! Goku returns after having been instructed by Kuririn to bring the Turtle Hermit and Bulma. Kuririn pulls down Bulma’s clothes when the timing is right, and blood shoots from the Turtle Hermit’s nose once he sees Bulma’s chest! Bathed in this nosebleed, the invisible man’s form appears, and he is defeated by Yamcha. Kuririn’s strategy wins! Meanwhile, the battleground is moved to the “Demons’ Toilet”! 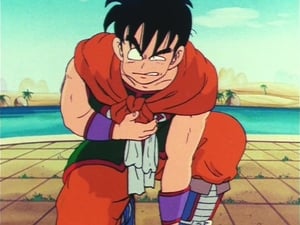