The fox mask-wearing fifth man is no ordinary person! A breathless offensive-defensive battle unfolds!! And then the fox mask man fires a Kamehameha of all things! But Goku doesn’t lose, and returns fire with his own Kamehameha, knocking the man down! In the instant it seemed like Goku had won, the fox mask man grabs onto Goku’s weakness, his tail! Seeing this, the Turtle Hermit realizes the fox mask man’s identity. He says that the opponent’s identity is Son Goku’s dead adoptive grandfather, Son Gohan!! 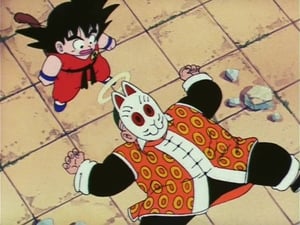