The tournament preliminaries have begun! Kuririn and Yamcha naturally advance through their respective brackets. Tenshinhan and Chiaotzu show up there, and rile them up with their bold demeanor. Sparks fly between the Turtle Hermit and the Crane Hermit’s disciples before the matches have even begun. Tenshinhan easily wins during his first appearance in the preliminaries, displaying a mere fraction of his bottomless ability! And then Goku’s turn has finally come! His opponent is King Chapa, well known as a master!! 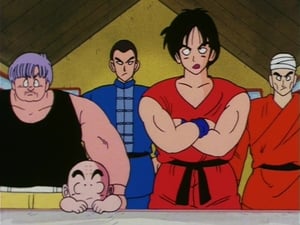