Seven years have passed since the battle with Cell. Gohan is now a high school student attending Orange Star High School, in Satan City. Gohan also has a younger brother named Goten, who was born after Goku died. On his way to his first day of high school, he comes across a bank robbery in the city and stops it with his Super Saiyan form. As rumors spread about a “Golden-Haired Warrior”, Gohan gets to know his new classmate and Mr. Satan’s daughter, Videl. After a day of trying not to act suspicious in front of his classmates, Gohan travels to Capsule Corporation to talk to Bulma about his problem. 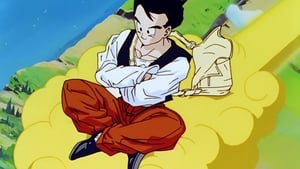