The Z Fighters split up to search the area for Android #20. Frustrated at his enemy’s deceptiveness, Vegeta fires a large ki blast at the cliffs, planning to level the area. Seeing this opportunity, #20 emerges from his hiding place, only to absorb Vegeta’s blast and run away before Vegeta can catch up. The android then attacks Piccolo from behind and begins to drain his energy, although this is thwarted by Gohan, who senses Piccolo’s fading ki and attacks the android. After receiving a Senzu bean, Piccolo then faces off against his attacker, and proves to be more than a match for the android. Meanwhile, Trunks finally returns from the future, and is disturbed to find that the remains of Android #19 are different from the androids that he faced in his own timeline. He then arrives at the current battlefield, and also seems not to recognize #20. Realising that he has no chance of victory, #20 decides to retreat to his laboratory, but not before launching a huge blast that engulfs most of the area – including Bulma’s ship, which plummets towards the ground. 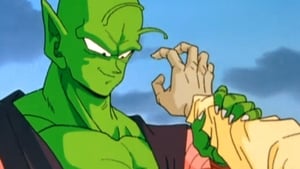