And So the Monster Makes its Move... Take Off! It's the Super Namekian!

Trunks, Gohan, and Bulma are investigating the other time machine when Gohan notices a strange shell that has been cast off by an unknown creature. On the way back to her house, Bulma watches a news broadcast about thousands of people in nearby Gingertown who have inexplicably disappeared, as if they simply melted away in their clothes. Kami also watches in horror as the people are killed, and finally decides to merge with Piccolo. After the merging, Piccolo states that he is neither Piccolo nor Kami anymore, but a Namekien “who has long since forgotten his name.” He departs from the lookout and arrives at an empty, ghostly-quiet Gingertown, where the monster steps out of the shadows to confront him. 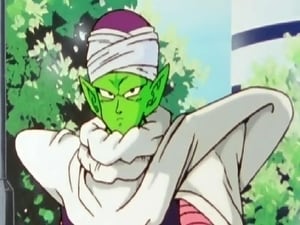