I am Your Sibling! The Monster with the Ki of Goku

While staring down Piccolo, the monster pierces the man he’d been dragging and appears to absorb him, leaving only his clothing. The others are confused, claiming that the android is emanating multiple ki readings characteristic of Frieza, Vegeta, and Goku. Krillin and Trunks head toward Gingertown, where Piccolo and the monster begin fighting. Piccolo has the advantage, but is surprised when the monster uses Piccolo’s own Makankosappo technique on him. The two exchange blows, and then the monster states that Piccolo only has the upper hand because he [the monster] has not yet reached his “perfect form.” He then surprises everyone by powering up a Kamehameha and launching it point-blank. Piccolo’s dodge leaves him open to the monster’s follow-up attack, which he uses to trap Piccolo in a hold and pierce his arm. Piccolo manages to escape, but his left arm has been completely incapacitated. Sensing he has won, the monster states that his name is Cell and reveals that he is an android. 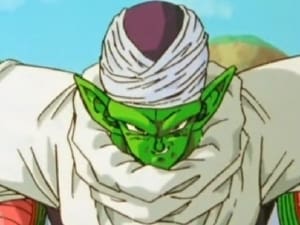