Sensing that he has defeated Piccolo, Cell explains that he was created from the cells of the greatest warriors–including Goku’s, Piccolo’s, Vegeta’s, King Cold’s, and Frieza’s–as a project started by Dr. Gero and continued for 24 years by his computer. Cell furthermore reveals that by absorbing Androids #17 and #18, he will achieve his “Perfect Form,” making him “invincible,” since Dr. Gero’s computer predicted that in his Perfect Form, Cell would be the most powerful being in the known universe. With the androids destroyed in his own timeline, he was forced to travel to the present one in Trunks’ time machine, after killing him. Having learned Cell’s identity and intentions, Piccolo regenerates his arm and prepares to attack. At this point, Trunks and Krillin arrive, and Cell realizes he has no chance of winning. He surprises everyone by using Tien’s Solar Flare technique to blind them, and then flees. Vegeta and Tien arrive, and Piccolo explains everything he’s learned. Meanwhile, Cell heads toward Nickytown to absorb more people, until his power exceeds that of the androids’. 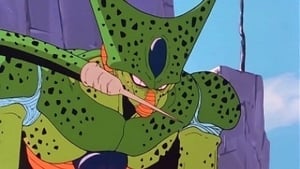