Goku and Vegeta’s fight continues to escalate, with Vegeta revealing he chose to go under Babidi’s control in order to gain the strength to face against Goku, feeling he needed to get rid of his gentle side. Meanwhile, as the seal containing Majin Buu starts to be break, Gohan attempts to stop him reaching full power by shooting multiple Kamehameha Waves at the egg. The egg splits apart with seemingly nothing more than pink smoke coming out of it, leading Supreme Kai to presume Majin Buu had been destroyed. However, Gohan senses a powerful energy from the smoke, which forms together to make Majin Buu, who appears to be nothing more than a mere child. 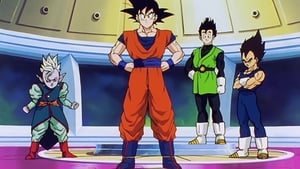