The Super Namekian Powers Up! Piccolo vs. Android 17!

Bulma is hard at work trying to figure out Dr. Gero’s prints. Meanwhile, Piccolo and Android #17 are fighting each other. After #17 gets serious, it turns out that he and Piccolo are evenly matched. Cell senses the two fighting and starts making his way towards them, stating that his power level is now higher than theirs. Krillin, and the others on a nearby island, receive a call from Bulma saying that she has completed the switch to shut down the androids and prepares to deliver it to the others. #17 states that since his stamina and power level will never drop, he will be the victor of the battle. However, Cell arrives at the scene of the battle, leaving Piccolo shocked. Meanwhile, Goku and Gohan are still waiting for Vegeta and Trunks to come out of the Hyperbolic Time Chamber. 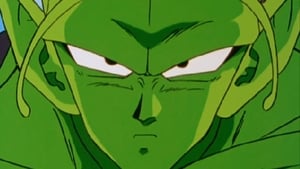