Dranbalt tries to help Natsu and his friends evacuate the island as the Magic Council plans to fire Etherion once again, but they refuse to leave. Meanwhile, Juvia is nearly defeated during her and Erza’s battle against Meldy of the Seven Kin, but regains her will to fight upon hearing Meldy say she wants to kill Gray out of revenge for hurting Ultear, and sends Erza to search for Gray and their friends. Seeing Juvia’s determination to fight for Gray leads Meldy to link both of their physical senses to Gray’s to ensure that he dies no matter who is killed in their battle. 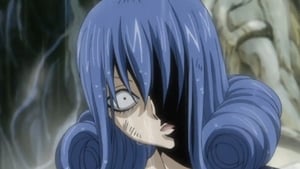