Azuma transforms into a tree as a result of overusing his Great Tree Ark, but makes good on his promise to Erza and returns the guild’s magical power, giving Gildarts, Fried and Bickslow enough strength to defeat Bluenote and Rustyrose. Meanwhile, Ultear tells Gray that the only spell that can defeat Hades is Iced Shell. She then takes Zeref and returns to Meldy, revealing to her that she is actually trying to manipulate Gray into defeating Hades for her so she can keep Zeref for herself. However, Gray is unfooled by her deception and, catching onto her true motives, challenges her. 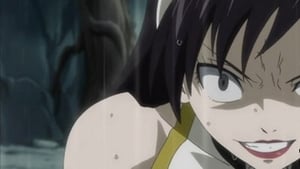