A Guild for One

Agents from the government dispatched to the site of Nirvana’s fall arrest Jellal; while everyone else resists, Erza stops them and urges the officials to take Jellal away, though she is devastated by the outcome. As everyone recovers at Caitshelter, it is revealed that the entire guild was an illusion created by the spirit of its guild master for Wendy’s sake. With Nirvana’s destruction, the spirit has fulfilled its purpose and Caitshelter vanishes. As Wendy is left behind crying, Erza invites her to join Fairy Tail. 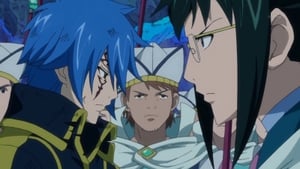