As Daphne sucks out Natsu’s magical power, Erza is fighting copies of herself in different armors in monster form. Elfman, Wakaba, and Macao comes and battle their copies too. Natsu remembers a faint voice. He remembers how he promised a town to kill or defeat someone who controls dragons. Knowing that, he bursted a loud Roar. Gray was called to the master’s room because he betrayed Fairy Tail. All of the fairy tail members help destroy the dragon as Natsu made his decision, he plans to die with the dragon. 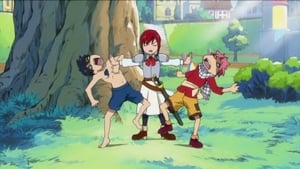