Natsu attacks the black-haired youth to no effect, causing the youth to despair that Natsu is not strong enough to defeat him. The youth unleashes another wave of death magic against Natsu and disappears, but Natsu is protected from the attack by his scarf, which turns black. Despite the encounter, the participants continue their exam as usual. Meanwhile, the most powerful dark guild of the Baram Alliance, Grimoire Heart, approaches Tenrou Island in search of the youth, who is revealed to be the ancient wizard Zeref. Levy, who separates from Gajeel after arguing with him, is attacked by Grimoire Heart members Yomazu and Kawazu. Gajeel rescues her, and the two prepare to fight against their attackers. 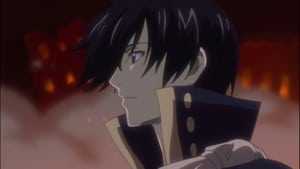