Mest is revealed to be a member of the Magic Council sent to Tenrou Island to search for incriminating evidence against Fairy Tail and disband it. He, Wendy, Charle, and Pantherlily are attacked and defeated by Azuma, one of Grimoire Heart’s most powerful members, the Seven Kin of Purgatory, who easily destroys the fleet of council ships Mest had summoned for support. Makarov attempts to cast Fairy Law to repel Grimoire Heart, but the dark guild’s master Hades counters the spell with Grimoire Law. Makarov recognizes Hades as Purehito, his predecessor as the master of Fairy Tail. 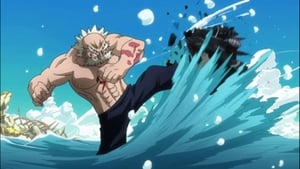