Xeno Vegito begins fighting Fu; the two of them seem to be evenly matched, until Fu uses his dark magic to change the area around them. He manifests a large combat arena for them to fight in, and prepares to engage both Vegitos in battle until the three of them are interrupted by the sudden arrival of the alternate Broly in his Legendary Super Saiyan form. Xeno Vegito overpowers Broly, until Broly also transforms into a Full-Power SS 4. The main timeline’s Vegito joins the fight and the two Vegitos battle Broly together, but even the two of them together struggle against his monstrous power. Meanwhile, Fu uses his magic to fully revive the Universe Tree. The main-timeline Vegito continues fighting Broly, while Xeno Vegito goes after Fu, but the Tree suddenly releases a massive wave of light that engulfs Fu, Broly, and the main-timeline Vegito. Xeno Vegito escapes, while Majin Salsa, Putine, Dr. W, Turles, the captive Cumber and Hearts’s spirit body are all enveloped by the energy wave. 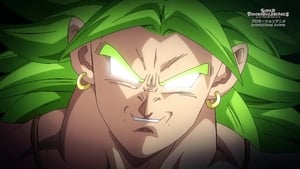