The Universe Creation Ends - The Birth of a New World!

Xeno Vegito outruns the energy wave before it dissipates, leaving the area around the Tree unscathed; he returns to find Fu holding the miniaturized form of the new universe created by the Tree. However, Fu is disappointed by his creation, as the new universe is flawed because Fu had to use his own demonic power to refuel the Tree rather than the pure energy of a normal universe. A furious Xeno Vegito attacks Fu, determined to stop him from doing anything else, and their battle resumes. Towa challenges Demigra, but his female companion takes her on instead, while Demigra uses a mystical technique known as “Time Labyrinth” to freeze both Xeno Vegito and Fu in time. Towa claims that Fu will be able to escape the frozen-time bubble, but Demigra is confident that he will not. On Beerus’s planet in the Seventh Universe, Whis and Vados sense the creation of the flawed new universe. Meanwhile, in the new universe, Goku awakens alone, in a strange, empty version of West City. 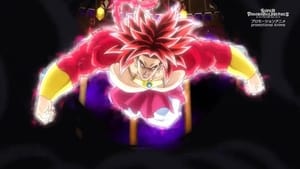