Gogeta launches an energy blast at the meteor, slowing it down and temporarily holding it in place. Hearts uses his full strength and overpowers Gogeta’s blast, propelling the meteor forwards again, so Gogeta powers up even more, charges up a Kamehameha and fires it at the meteor instead. Trunks is worried that the Earth will be destroyed, but Piccolo refuses to give up. Hit and Jiren join Gogeta and add their own blasts to the Kamehameha, increasing its power and ultimately shattering the meteor. Trunks, Piccolo and 17 shield the Earth from the meteor’s fragments, while Gogeta and Hearts engage in a final clash. Gogeta overpowers Hearts and delivers a finishing blow that shatters the Universe Seed embedded in Hearts’s chest, causing his body to disintegrate. As he dies, Hearts explains that he was merely trying to free all mortals by defeating the Omni-Kings, as their power to destroy entire universes on a whim prevents mortals from ever being truly free. 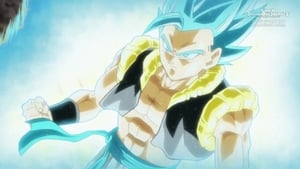 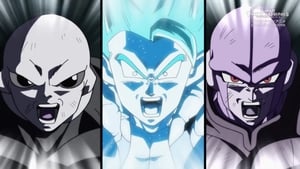