Fu, accompanied by an unknown female companion, meets with a group of villains – Meta Cooler, Turles, Bojack, Super Android 17, and a mysterious humanoid scientist known as Dr. W – on the Universe Tree, where he reveals that he rescued all the villains from the moments before their deaths at the hands of the Z-Fighters and convinces them to help him in exchange for places in the new universe that he is creating. Meanwhile, Goku, Vegeta, Xeno Trunks and Xeno Pan are searching for Fu, when they are attacked by Turles and Bojack. The two villains reveal that Fu has been able to increase their power immensely, as they are now strong enough to fight on par with Goku and Vegeta’s Super Saiyan Blue forms and have auras similar to Cumber’s. As the battle rages, Xeno Trunks spots Fu observing the fight: Goku and Vegeta try to engage him instead, but Turles and Bojack block their way. Elsewhere, Xeno Goku and Xeno Vegeta arrive in Hell, and are confronted by the mysterious Dr. W. 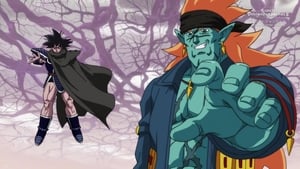 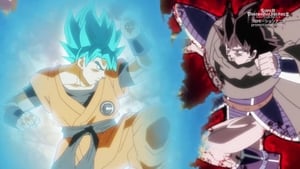