After freeing Vegeta’s body from Oren’s control, Goku confronts Hearts. Oren and Kamin attack Goku again, but he easily overpowers them both. Realizing that they can’t beat Goku separately, the two fuse into “Kamioren” to take him on. Meanwhile, Jiren throws a massive energy blast at Zamasu, but Zamasu survives unscathed thanks to his immortality. As Goku is winning against Kamioren, Hearts uses his powers to launch a crystal from the Universe Seed at Goku. Unable to hold its shape under the pressure of Goku’s and the Universe Seed’s power, the crystal shatters and reveals a being called “Rags”, the final member of Hearts’s gang. Goku loses Ultra Instinct and reverts to his base form, exhausted by the effort of blocking the crystal. Rags then uses the broken pieces of the crytal to injure him, slicing him repeatedly and knocking him out. With Goku unconscious and unable to continue the fight, Vegeta powers up to his evolved form of Super Saiyan Blue and gets ready to fight Kamioren. 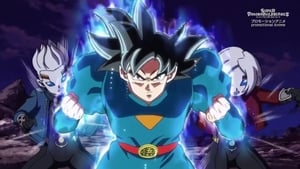