Vegeta begins fighting Kamioren, and seems to have the advantage. Rags attempts to finish off Goku, but Trunks intervenes and takes her on instead. Vegeta begins winning against Kamioren, and defeats them with a Final Flash that forces Kamin and Oren to separate. Meanwhile, Jiren continues to overpower Zamasu and injures him, but Zamasu’s injuries quickly heal. Rags attacks Trunks with her crystals, but Goku knocks him out of the way and takes the attack himself. Hearts steps in and sends Rags to join Cumber in Universe 3, before confronting Goku himself. He reads Goku’s mind and discerns that he hasn’t perfected Ultra Instinct yet, but decides to try and draw out Goku’s full power so that he can defeat him at his strongest. Goku, Trunks and Vegeta all attack Hearts, but he uses his psychic powers to immobilize them. Goku begins fighting to resist Hearts’s powers, but Universe 7’s Kaioshin suddenly appears and rescues the three Saiyans. 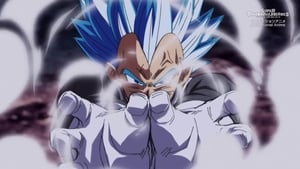 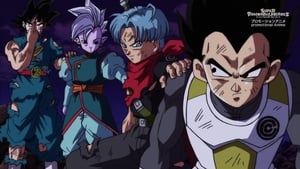