Hearts, Zamasu, Oren and Kamin arrive in Universe 7 to destroy it, but are confronted by Goku, Vegeta, Future Trunks, Android 17 and Piccolo. Oren and Kamin head for Vegeta, but are intercepted by 17 and Piccolo, while Vegeta and Trunks take on Zamasu. Goku repeatedly attempts to attack Hearts, but keeps getting pulled down by Hearts’ gravity manipulation before he can get near him. Meanwhile, in Universe 3, Cooler, who is now a “Meta Cooler” cyborg, has defeated Rags and is fighting Cumber. After having some difficulty with Cumber’s Super Saiyan form, Cooler transforms into his Golden form and overpowers Cumber; he begins charging up three Supernova attacks to end the battle, but his systems begin to overheat. Cooler launches the blasts, knocking Cumber out, but his overheating circuits are damaged and he is forced to retreat before he can finish Cumber off. Back in Universe 7, Oren and Kamin fuse into Kamioren and Hearts powers up as Goku stands up, ready to keep fighting. 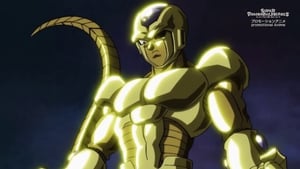 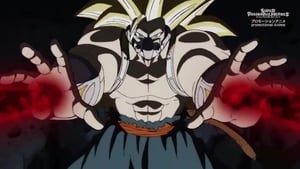