After powering up, Hearts attacks Goku and their battle intensifies, with Hearts holding the advantage until Goku powers up to Super Saiyan Blue, after which they appear to be evenly matched. However, they both acknowledge that neither of them is fighting all-out yet. Goku is able to gain the upper hand and overpowers Hearts with a Kamehameha. Meanwhile, Trunks and Vegeta continue their battle with Zamasu, while 17 and Piccolo are able to catch Kamioren off guard, with 17 holding off their attacks while Piccolo charges up a Special Beam Cannon that wounds them. However, Kamioren regenerates and powers up wildly, enraged by the possibility that they could lose. Hearts gets back up and powers up again, using his control of gravity against Goku; Goku is able to withstand his attacks, so Hearts powers up even further. 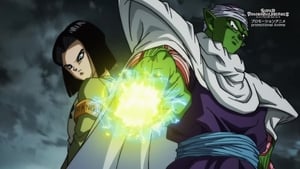 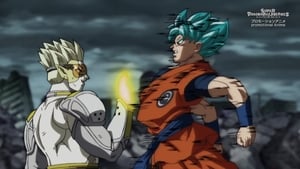