Goku begins fighting Kamioren, and the two seem to be fairly evenly matched in terms of power, until Goku reaches the mastered level of Ultra Instinct and easily deflects Kamioren’s attacks. He overwhelms Kamioren with help from the others, damaging them with a Kamehameha and a barrage of energy blasts before shattering their core with a final punch, causing their body to disintegrate. Goku loses his Ultra Instinct again, while Hearts expresses sorrow over the deaths of Kamin and Oren, before retrieving the now fully-charged Universe Seed from Kamioren’s remains. Hearts begins absorbing the power of the Universe Seed, surrounding himself in a huge cloud of crystal cubes. Meanwhile, Zamasu looks on in satisfaction, but also seems to have his own agenda. 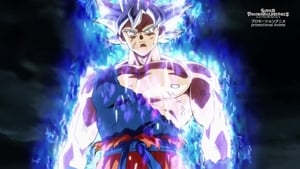